Lion: the undisputed king of the savannah

The lion is the largest African carnivore and one of the largest terrestrial carnivores in general; among the big Panthera cats it is second only to the tiger; along with elephant, rhino, buffalo and leopard, it is one of the so-called Big Five.

It has a strong, massive body, with a powerful muscles structure especially in the male, while the female has a more agile structure and slightly smaller dimensions.

The thick mane is typical of adult males, with remarkable individual variability by color, from blond-reddish to dark tones, and extension; the mane grows progressively, being visible already around the age of two, it achieves the maximum development in the phases of full physical force, 7-10 years, and declines with aging. In some cases, however, it may be poorly developed or almost absent even in the adult.

The mantle has also a variable color, gray-yellow or tending to the brown, while the lower parts are much clearer. The tail ends with a tuft of dark hair, that is believed to serve as a signal to attract the attention of puppies, often playing with it.

The lion lives in family groups that comprise on average 5-8 adult subjects, including one or two dominant males.

Only dominant males have the right to mate with the lionesses of the herd, while the young are pushed away when they are about to reach sexual maturity: from now on, as lonely individuals or in coalitions of 2 or more specimens, they will have to become self-sufficient until they can win their own herd, dropping the previous leader.

In turn, older males who have lost supremacy, begin to lead a lonely existence, but usually with a life expectancy of a few years.

Like many felines, lions spend much of their time to rest, around 20 hours a day, and are mainly active around sunset and before sunrise, when they prefer to hunt.

The lion is however the only social feline species in the strict sense, the herds are made up on average of 4-5 adult females, a couple of adult males, in addition to young subjects and cubs .

In addition to hunting, the lionesses are also very cooperative in the care of the young, raised together and often suckled by the different mothers of the group.

The herd is distinctly territorial and occupies an area that, based on the number of members and the density of prey, is sufficient for sustenance and can be effectively defended; the extension can therefore vary greatly depending on the environmental characteristics of the area, from 20 to about 400 sqkm .

Patrolling and the defense of the territory are the main task of the male, who spends most of his activity time walking and marking the area with olfactory traces, typically sprays of urine on bushes and shrubs.

Even the famous roar, audible from several kilometers away, is often used to signal one’s presence and intimidate potential rivals, especially at sunset and before dawn. 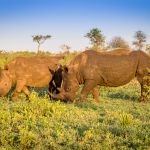 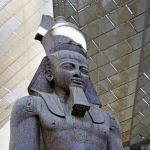